Porkchops & Politics with A. Peter Bailey 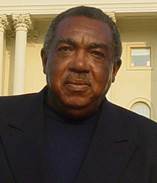 Due to limited space, we require advanced registration for Pork Chops and Politics. The event includes a lecture and book signing. Seating is limited to the first 50.

PETER BAILEY is an acclaimed Journalist, Author, and Lecturer. He was a founding member of The Organization of Afro-American Unity (OAAU), organized in 1964 by Brother Malcolm X. Bailey was editor of the OAAU newsletter, Blacklash. He was one of the last few persons to speak with Brother Malcolm X on the day of his assassination (February 21, 1965) and served as one of the pallbearers at his funeral.

Bailey, a former editor of Ebony magazine, is the author of Witnessing Brother Malcolm X, The Master Teacher:A Memoir, Harlem: Precious Memories, Great Expectations, co-author of Revelations: The Autobiography of Alvin Ailey with Alvin Ailey and co-author of Seventh Child: A Family Memoir of Malcolm X with Rodnell P. Collins (nephew of Malcolm X). He assisted John Henrik Clarke with the editing of Malcolm X: The Man and His Times.

While Associate Director of The Black Theatre Alliance (BTA), Bailey edited the BTA Newsletter. He has also contributed articles to numerous publications including Essence, Black Enterprise, Jet Magazine, the New York Times, the Negro Digest, Black World, The Black Collegian, and the New York Daily News. Bailey, born in Columbus, Georgia and raised in Tuskegee, Alabama, attended Howard University. He currently resides in Washington, D.C. where he has taught Communication courses as an Adjunct Professor and conducted workshops on writing memoirs and autobiographies.