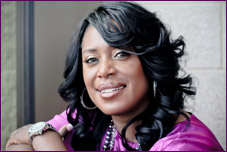 Due to limited space, we require advanced registration for Conversation & Roses. The event includes a lecture, Q & A and light hors d'oeuvres

Before her affluent life as an NFL wife, Dorothy Johnson Newton was raised in poverty by her mother and stepfather near New Orleans, the oldest girl of six children. Dorothy put herself through college on an athletic scholarship and her brother from her biological father is Mike Johnson, who played eight years for the NFL’s Cleveland Browns, so it is not surprising that she ended up the celebrity wife of a football star—but all that glittered was not gold.

From a young age she witnessed her stepfather physically and verbally abuse her mother—images that would haunt her for years. Though she promised herself that she would never be in such a marriage, like so many others, she repeated her mother’s pattern—her abuser just happened to be a loved celebrity—a Super Bowl NFL football champion with the Dallas Cowboys. Who would believe her even if she dared to reveal her painful secret?

Dorothy too excelled in sports, earning a volleyball scholarship to the University of Louisiana where she received her Bachelor’s Degree in Sociology and Business. She is an active member of Gateway Church in Southlake, Texas, a Christian speaker and Bible study leader who inspires women to cling to God and receive deliverance, healing, and restoration. She works with many organizations including Jack & Jill of America, SASO (Scholars & Athletes Serving Others) and Presbyterian Homeless Night Shelter.

Dorothy is the Practice Administrator for a health care organization, where she is pursuing her M.B.A. She is the proud mother of two boys—Nathaniel Newton III (Tre’), and Nate King Newton. She has appeared on numerous television and radio programs as the former wife of retired Dallas Cowboy’s NFL player Nathaniel Newton, Jr.