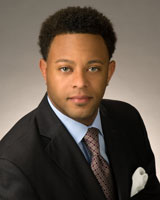 Due to limited space, we require advanced registration for Pork Chops and Politics. The event includes a lecture and meal purchase of $10.00, payable on-site. Seating is limited to the first 50.

Corey Dade, a staff reporter in the Atlanta bureau of the Wall Street Journal, joined the Atlanta Press Club's board of directors in 2008.

At the Journal, Corey covers politics and economics across the South. His previous assignments have included Hurricane Katrina, Delta Air Lines' bankruptcy, the Virginia Tech shootings and the 2008 presidential campaign.

Previously Corey has worked at the Boston Globe, Atlanta Journal-Constitution, Detroit Free Press and the Miami Herald. He is a frequent commentator on TV and radio networks such as Fox News, National Public Radio, CNN, Headline News and CNBC.